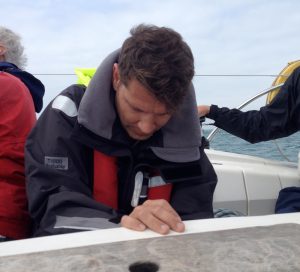 Fatigue, seasickness and hypothermia may be encountered individually, but they can also frequently occur together, often with each element helping to feed the others. Each can be debilitating on their own, impairing decision-making ability and eliminating any enthusiasm for deck work.

Fatigue is easily avoided by getting ample sleep before sailing and through taking ample periods of time off watch on a longer passage. It’s also important to have adequate hydration and nutrition, both of which are all too frequently neglected when under way. The latter is doubly important for those who normally live a sedate desk-bound life – on a yacht by mid afternoon you may already have used as many calories as during the whole of a normal day, which can result in blood sugar low unless you’re eating more than usual. 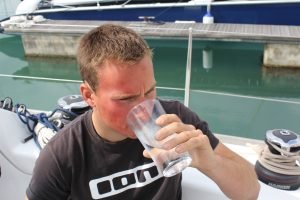 It always feels colder afloat than onshore so sunburn and sunstroke are easily underestimated on the water, especially in breezy conditions. Also, there’s more glare and reflection when on the water. You therefore need to take these risks seriously, making sure you use plenty of sunscreen and remain well hydrated. Watch out for potential problems among fellow crew – the initial signs are much easier for someone else to see than to self diagnose. 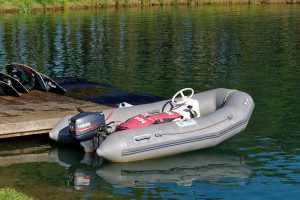 The dangers inherent in using a dinghy to get ashore from a mooring or anchorage are all too easily underestimated. Many more sailors are lost from their tenders, or when transferring between dinghy and yacht, than are lost at sea.

Lifejackets should be worn and you also need a bullet-proof means of signalling distress in the event of problems. When getting in and out of a dinghy tie it to the yacht or dock with both bow and stern lines – this will prevent the tender swinging away from the yacht, which is the most common reason for people falling between the two.

As always, try to predict changing conditions. An apparently benign trip ashore on a sunny evening may turn into a completely different situation if the wind is forecast to strengthen and the tide will be ebbing fast when you return to the boat. 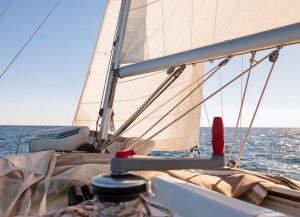 4. Head injuries from the boom or mainsheet

Head injuries from an accidental gybe have the potential to be one of the most serious dangers of all, and is capable of inflicting life changing injury. It’s important that everyone on board is aware of the danger, especially the hazard zone for boats with cockpit mounted mainsheet systems. As well as pointing this out in initial briefings, the skipper must also ensure everyone’s safety is assured during a planned gybe.

However, it’s accidental gybes that lead to the majority of incidents. Given that by definition an accidental gybe is an unplanned event, at first sight it might appear difficult to guard against this danger. However it’s possible to ensure that accidental gybes never happen when sailing downwind if the helm is properly trained, fully in control and the crew remain alert.

Falling overboard has the potential to be one of the most frightening and life-threatening experiences that can be encountered at sea. The old cliché that prevention is better than cure is particularly apt for MOB situations and it’s crucial to give thought to making certain everyone stays on board. Harness discipline is vital and crew members should be encouraged to build up a constant awareness of potential dangers, as well as looking out for other people, especially those who are less experienced. If the worst happens, wearing a properly-fitted lifejacket with a crotch strap can multiply survival times 10-15 fold, especially if it’s fitted with a spray hood and light. 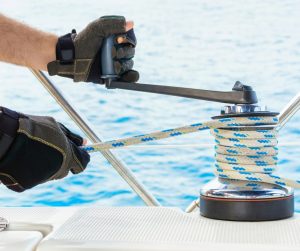 6. Crushing fingers in a winch

The loads encountered on modern yachts are all too easily under estimated. For instance the genoa sheets of a 10 metre cruising boat may carry well in excess of half a tonne – a level that must be handled with care. Therefore all crew members should be briefed in good line-handling discipline, including how to add and remove turns from the winch drum, how to safely ease or release the sheet and so on. Anchor windlasses also need to be treated with similar respect.

A boat’s fresh water system needs annual maintenance to keep it in good condition. Some boats have far more complex systems than others, with pressurised hot and cold water, associated pumps, an accumulator, calorifier and pressure valves, all to keep a boat owner busy.

A boat’s records should provide information about maintenance schedules, when major work was done and when equipment was replaced or added to the boat. Without this information you are left guessing when things are likely to need replacing in the future and also what the costs are likely to be.