Some boat engine breakdowns are unavoidable but those caused by lack of maintenance or regular checks can be avoided. Failure to maintain an engine’s cooling system is a well known example of this, so it is well worth spending time checking over the cooling system both when the boat is ashore and afloat. 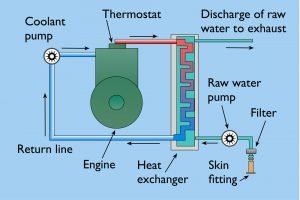 Many boat engines are cooled by a combination of fresh water and sea water, also known as raw water, using a system known as indirect cooling. Raw water refers to the water that the boat is floating in, hence on an inland waterway this may be fresh water and at sea it will be salt water.

An indirect cooling system works as follows. Raw water enters the boat via a seacock and passes through the raw water filter to remove weeds and debris. It then passes through hoses and a pump to a heat exchanger and back out of the boat via the exhaust system.

The fresh water is contained in an enclosed system similar to a car’s cooling system, using a combination of fresh water and antifreeze supplied by a header tank which can be topped up when required. The main difference between the car and the marine engine is that the marine engine uses a heat exchanger instead of a radiator. The fresh water circulates around the engine and passes through the heat exchanger, which usually forms part of the header tank on smaller engines but may be separate on larger engines. Once in the heat exchanger the fresh water is cooled by the raw water which is pumped through small diameter cooling tubes – note that the raw water and fresh water do not mix together. The sea water is then pumped into the exhaust system where it mixes with the exhaust gases and ends up being pumped out of the exhaust into the sea. 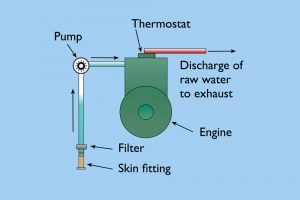 The more basic system of engine cooling is direct cooling, where raw water is pumped through the engine block and back out to sea, with no secondary freshwater system used at all. This might sound more straightforward but the problem of corrosion can become a big issue.

Inspection of the cooling system 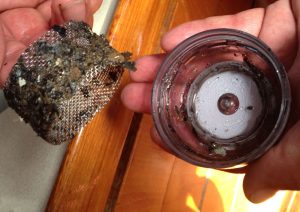 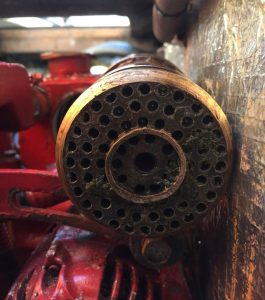 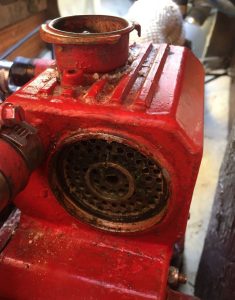 Here are some things to check for:

The most common reason for the failure is that the rubber impeller has disintegrated. To be on the safe side, most manufacturers advise the impeller is replaced annually. Certainly it needs to be inspected when the boat is ashore, even if it has been replaced during the season, and many boat owners remove it during the winter as this helps to prolong its life. 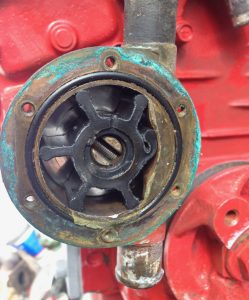 You will need a replacement impeller and gasket. When ordering remember to have your engine number at hand to ensure you get the correct parts. This is how to replace it:

The first question that comes to mind when thinking about buying a boat is: what type of boat? There are more than 20 different kinds, of different sizes, for different purposes, and different pockets. So, your first step is to decide your boat type.