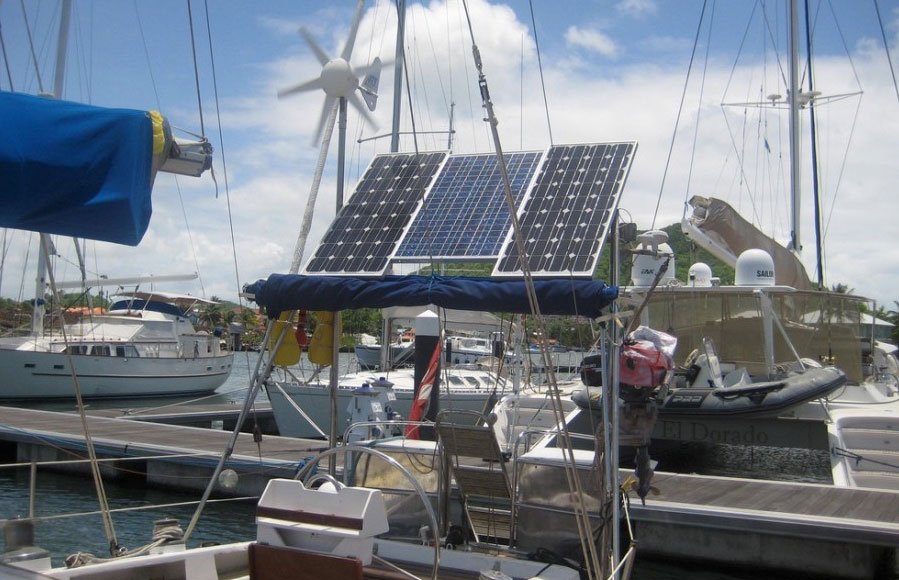 Boat batteries need to be kept properly charged, which means never allowing the batteries to discharge below 50 per cent of their total charge.

As well as the batteries themselves, keeping a boat’s charging systems in good shape will also help to keep batteries topped up to a higher level of charge. The output of standard alternators can drop to as little as one-third of the alternator’s rated output after only 15 minutes or so of engine running. However, a smart charging regulator will keep the charging rate close to the initial figure, thus re-charging the batteries in minimum time. These have a further advantage in that they charge batteries to as much as 95 per cent of capacity – compared to less than 80 per cent for a standard alternator regulator.

In addition to improving charging systems, minimising the power drawn from batteries will also extend their lifespan. This need not involve major inconveniences – changing to LED lighting, for instance, will significantly reduce daily current drain, and costs significantly less than replacing a battery bank that prematurely runs out of puff. It’s also worth ensuring the fridge has at least four inches of insulation all round. Unfortunately, many are lacking in this respect, which can put a huge strain on batteries.

The diagnosis of many boating electrical problems is within the grasp of anyone with basic knowledge of electrical systems and a few key skills.

At a basic level, one of the most useful diagnostic tools is a simple digital voltmeter. The voltage produced by a battery, when no load is being drawn from it, is a good guide to its state of charge. When fully charged, a 12V battery can theoretically hold up to 13.2V, although in practice 12.8V or 12.9V is a more likely maximum. At 12.5V, the battery has 75 per cent of its maximum charge remaining, and at 12.2V there’s 50 per cent of the battery’s total capacity left – the point at which the battery should be recharged. 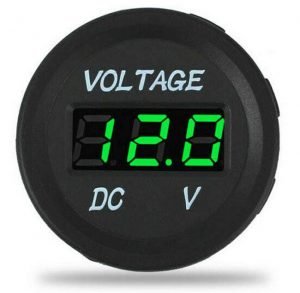 If the reading drops to 12.0V, there’s only 20 per cent of the battery’s capacity remaining, and the battery will be (almost) fully discharged at 11.8V.  A battery that’s nearing the end of its life may still give reasonable voltage readings when fully charged, but only if no load is being drawn. Switching a couple of lights on will create a large voltage drop in a weak battery, whereas an example in good condition will show a drop of only 0.1 or 0.2V in these conditions.

The voltmeter can also be used to check that the alternator is producing charge. Standard alternators have their output capped at around 14.2-14.4V, although there may be a voltage drop of 0.5V, and occasionally more, by the time the charge reaches the batteries. If there is little or no increase in voltage across the battery when the engine is running, then it’s very likely that there’s a problem with the charging system that will need further investigation.

Unfortunately, it takes a long time for battery voltages to settle when load is removed, or after charging, and while a reasonably stable voltage may be seen after a few minutes, it takes several hours for the voltage to completely stabilise. This is one of the benefits of more sophisticated battery monitors that give a precise indication at any time of how much charge there is left in the batteries. 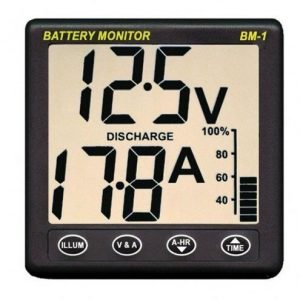 When properly calibrated, battery monitors can account for all factors that affect battery state, including calculating the total charge delivered to the batteries, and subtracting the total charged used by the boat’s systems. In addition to battery voltage, these monitors can display battery charge/discharge current; state of charge of the battery in Amp-hours (Ah) or in percentage of total capacity; and time to go until the battery needs to be recharged.

Additional information available includes the average depth of discharge, depth of deepest discharge; number of charge/discharge cycles and number of occasions on which an under-voltage alarm has been triggered.

With many boats running numerous electrical devices, keeping the batteries topped up on a long passage, or during a period at anchor, can be a challenge. However there are now many options that mean there should be no need to rely on the engine for this. In the past wind generators were the mainstay for the power needs of many long-term cruisers and still have their fans today. However, they also have a number of drawbacks – when sailing downwind, for instance, the reduction in the apparent wind speed means their output is quite low.

The cost of solar panels has fallen rapidly and they are increasingly becoming the primary means of charging on many boats. On passage this can be supplemented by further inputs from a towed generator, or from the type of hydro-generator that’s increasingly common to see on long distance racing yachts.

There are many ways to communicate with others at sea. What makes the VHF DSC radio the best form of short range...
Read More

SafeSkipper2 days ago
Our article on Gas System maintenance gives advice on how to check all types of hose for corrosion and how to ensure your systems stays safe: https://loom.ly/A6xaLmo #sailing #boating #BoatMaintenance

There are correct types of hose for marine plumbing, sewerage, exhaust, cooling and gas and all hoses should be checked regularly for wear and deterioration.
View on Facebook

SafeSkipper3 days ago
Read our new article on care and maintenance for all types of marine toilet. Covers how to deal with scale deposits, blockages, odours and winterisation: https://loom.ly/Ys8X6LM #BoatMaintenance #Boating #Sailing

There are a number of different types of marine toilet, or heads. They fall into one of three categories – manual, electric and vacuum, the most common being the manual, hand pumped type. These have double acting piston-pumps which both discharge the waste and flush the toilet with sea water.
1    View on Facebook

SafeSkipper4 days ago
Seacocks are often awkward to get at, awkward to open and close, and often ignored. Should they fail, the results can prove disastrous. Make sure you know how to maintain them! https://loom.ly/nIFBRN4 #sailing #boating #boatmaintenance