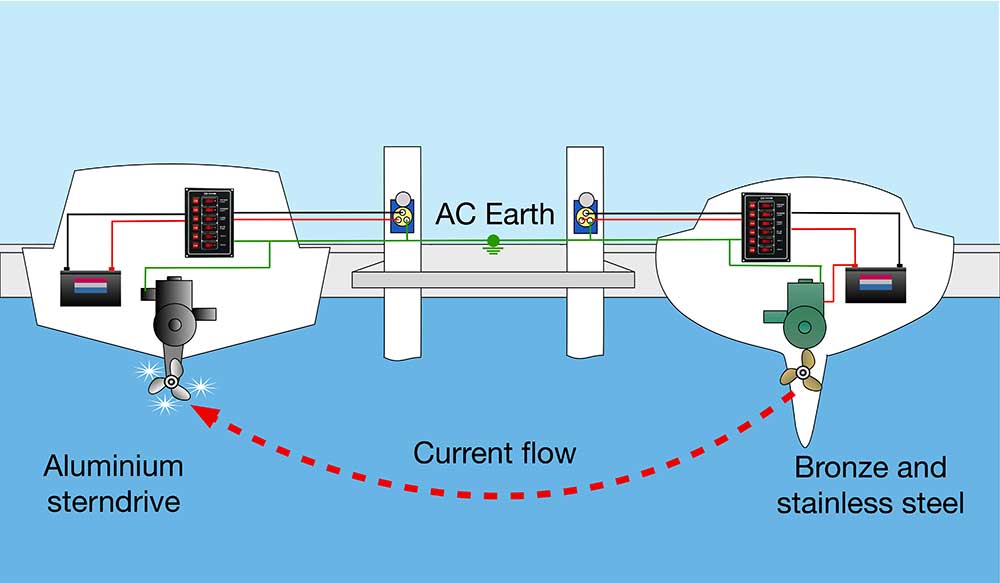 If sacrificial anodes are disappearing very quickly this can indicate there is a galvanic or electrolytic problem caused by electrical currents, which means an electrical circuit is being made for some reason. In order to understand what could be going on, it is worth trying to get to grips with the differences between these two forms of corrosion.

Galvanic corrosion is an electrochemical reaction between two or more different metals, in the presence of an electrolyte (note salt water is a good electrolyte). In other words, one piece of metal will be corroded, known as the anode, and the other piece of metal will be unaffected, known as the cathode. Common examples of galvanic corrosion are where an aluminium outdrive comes into contact with a stainless steel propeller, causing the aluminium to corrode, or where aluminium comes into contact with copper or bronze fittings. The first signs of galvanic corrosion is blistering of paint below the waterline and the formation of a white powdery substance on exposed metal. The exposed metal areas become deeply pitted as the metal is eaten away by the corrosion.

Electrolytic corrosion, also known as stray current corrosion, is an electrochemical process where a metallic surface is corroded by another metal it is in contact with, due to an electrolyte and the flow of an electrical current between the two metals, caused from an external source of electromotive force (EMF). In other words, electrolytic corrosion is caused by a current such as a boat’s battery or a shore supply. Metal hull boats are particularly at risk because their hulls are good conductors and stray wires or connections use the hull as a ground.

Preventing electrolytic corrosion requires good electrical installation where marine grade wiring should be insulated return with two wires rather than earth return. Metal hulls must never be used as the earth return.

Risks from electrolytic and galvanic corrosion

Aluminium boats are at risk from electrolytic and galvanic corrosion. Aluminium boat owners need to take precautions that would not be of concern to owners of GRP boats. For example, it is wise not to stay too long berthed next to a steel-hulled boat in a marina, where both vessels are connected to shore power. The reason for this is an electric circuit can form between the two vessels with the aluminium hull acting as an anode and the steel hull acting as a cathode, resulting in galvanic corrosion of the aluminium hull.

Owners also need to make sure that the shore power polarity is correctly wired in marinas as this can lead to corrosion too. They also pay particular attention to the condition of their wiring and electrical systems, to protect the boat from electrolytic corrosion.

Some aluminium boats are equipped with current leakage meters which display real time corrosion potential that warns of problems with electrolytic and galvanic corrosion.

Yachting Safety Briefing   Down below Lifejackets and harnesses - fitting, when to wear, clipping on Gas - risks,...
Read More