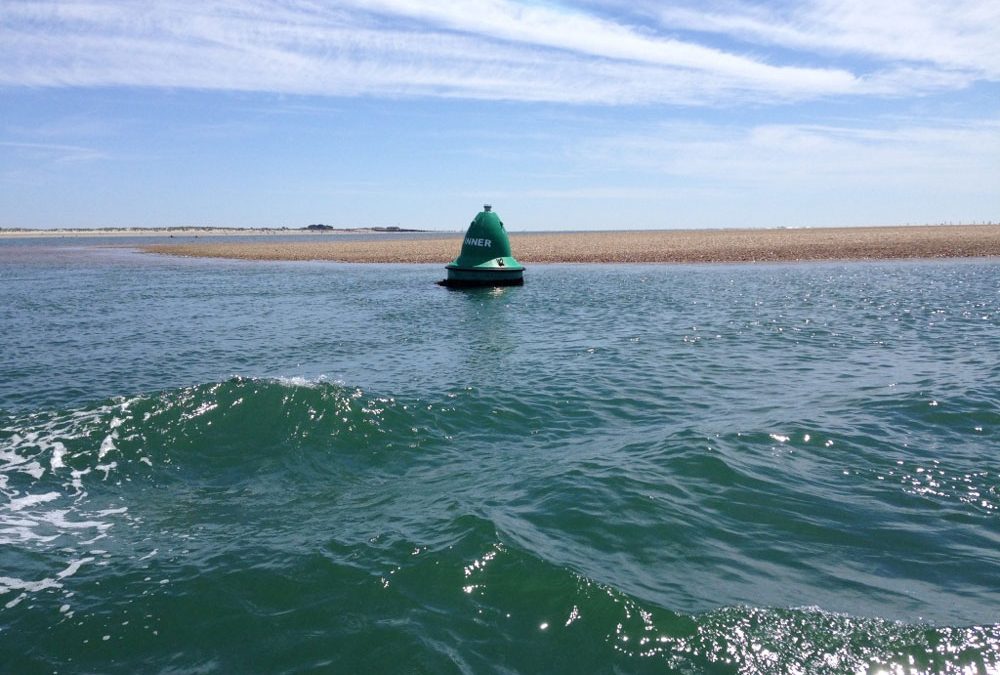 Big tides demand considerable respect and require a greater degree of planning to ensure you don’t allow them to work against you, as well as creating the potential for a confused sea state in wind against tide conditions. However, with careful timing a big tide can also be used to your advantage, either to considerably speed progress towards your destination, or allow you to take useful short cuts if the water level is sufficiently high. 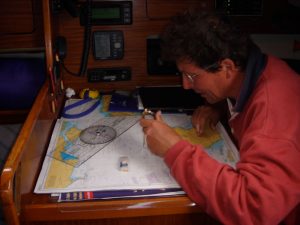 Strong and complex tidal streams are one of the biggest challenges in some parts of the world. For instance spring tides on the south coast of the UK can run at up to four knots, and even stronger rates are possible in parts of northern France and the Channel Islands, as well as around other significant headlands. In places where tides set strongly many displacement craft will need to time their passages for a favourable stream in this area, while planing powerboats will need wind with tide on account of the steep seas generated in wind against tide conditions.

A tidal stream is rarely a uniform mass of water moving at a constant speed in a uniform direction. Instead, it is weaker in shallow water and near the shore, and at its fastest in deep water. The core principles are that the tide runs fastest in deep water, while relief from an adverse stream can be gained in shallow water. In addition the stream in shallow water and in bays will frequently change direction before the main stream – in effect the edges turn first, which can start very early as a back eddy, before the main stream follows in the new direction anything between 30 minutes and as much as three hours later.

The direction of the wind relative to the tidal direction has a significant impact on sea state. If both are flowing in the same general direction, the sea will tend to be flattened out, while wind against tends to produce a short and steep sea that can be very tiring, even if the stream is helping you make progress towards your destination. 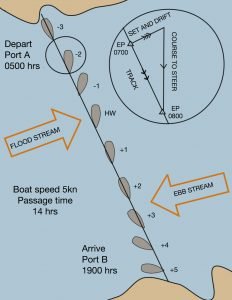 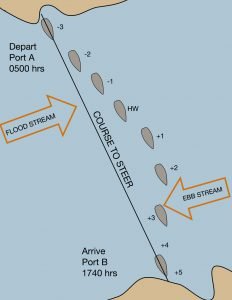 In a strong cross tide it’s all too easy to be swept down tide of the rhumb line between your starting point and destination. In an area such as the Solent, between the mainland and islands off the Brittany coast, where distances are very short, GPS can be used to ensure you track in the correct direction. However, there’s also an easy solution for boats without electronic aids: use a hand-bearing compass to keep the mark behind you on a bearing that will lead you to the next mark. It’s very simple and very accurate and if you’re able to line up a couple of marks on shore to that are on the correct bearing you can do it all by sight.

Longer legs, taking more than an hour or so, in which the strength or direction of the tidal stream changes significantly will need a different approach. Here a course to steer calculation, that allows for the net tidal flow you will experience is more efficient than constantly adjusting course as the stream fluctuates.

Tidal races tend to form off headlands, where the tidal rate is accelerated and the sea bed is liable to be very uneven, often with a significant underwater ridge. As a result, it’s possible to get disturbed water even in almost calm conditions and they can be positively dangerous, even to ocean going yachts, in wind against tide conditions in anything more than a moderate breeze.

A race can be avoided by staying a few miles offshore in moderate conditions and more in severe weather, however, the exact distance necessary varies with different headlands – look for the symbols on you chart for overfalls and tide races. It’s also important to consult local pilot books, which will provide more detail about each significant headland and the conditions that can be expected there in different conditions.

In some cases, in good to moderate conditions smoother water often exists very close inshore – this passage is up to half a mile wide, but can reduce to 50-100 metres as the wind increases and may vanish completely in poor conditions. Again pilot guides will indicate whether such an inshore passage is available and, if so, which stages of the tidal cycle the stream will flow in each direction.

A similar situation can arise with sand bars at a harbour entrance. With a strong onshore wind and ebb tide, these have the potential to form dangerous breaking waves in shallow water. In such cases it’s invariably safer to stay at sea in bad weather than it is to risk entering the harbour. 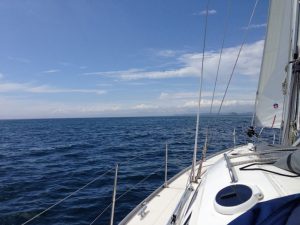 The speed of an adverse tide at some headlands effectively turns them into tidal gates that you won’t get past unless the stream is flowing in the correct direction. Clearly, a similar situation also exists with bars and harbour entrances and harbours that have restricted tidal access.

If possible, time your passage so that you aim to get to the tidal gate an hour or so before it opens. You’re much more likely to arrive there later than expected, rather than earlier, so this approach maximises the chances of getting through unhindered.

Be careful when you’re sailing near low water on spring tides as there may be a lot less depth than you expect for an hour or so each side of low water. Pay particular attention to areas that, because they’re never exposed – and are therefore shown on charts as blue, rather than green – can all too easily catch the unwary. Some of these in popular sailing areas may have least depths of only 0.6m below datum well offshore. They are therefore covered by a reasonable depth for maybe 98 per cent of the time, but for an hour or two on a few days once a fortnight will be too shallow for any yacht to pass over.

There are many ways to communicate with others at sea. What makes the VHF DSC radio the best form of short range...
Read More

Rudders and steering systems. A rudder is one of the most critical parts of a boat. Rudder failure is a common occurrence on neglected or overworked boats and a very unpleasant and potentially dangerous thing to happen when you are out at sea.