Jester Challenge 2022 – Sailing single handed from Plymouth UK to the Azores: Part 8 – Arriving at the Azores 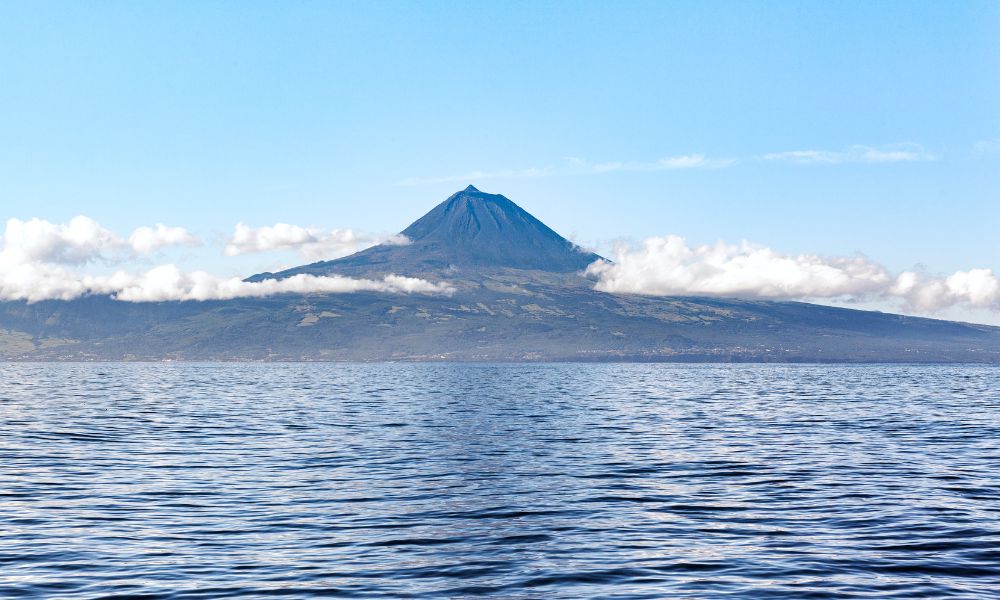 Jester Challenge – A modern experiment in old-fashioned self-reliance, self sufficiency, and personal responsibility.

The Jester Challenge was created for skippers of small boats who want to test their skill and self-reliance, is a uniquely successful experiment in single-handed ocean sailing. This site tells you everything you need to know about it: its history, philosophy, guidelines and future events, along with the views and experiences of skippers who have taken part over the years.

There is a Challenge every single year and new skippers are always welcome. If you like the idea of developing your offshore seamanship in a relaxed and supportive environment, visit the Jester Challenge website.

This is the eighth of a 10-part post where solo sailor Bernie Branfield shares his first hand account of his single-handed, 2022 Jester Challenge, from Plymouth, UK to the Azores, in his 26′ Invicta Mk2, Louisa. You can read more about Bernie at the end of the post.

I reached Terceira after 25 days at sea and was so grateful to be on shore. The trip over had been a challenge! I was aiming for Praia do Vitoria but due to the wind direction in the final 24 hours ended up in Angra.

Angra do Heroismo is the capital of Terceira and, as I was to find out, had been the capital of Portugal twice in its history. For a capital city, it is the size of a medium sized town in the UK and was a great combination of old and new. The marina is situated at the bottom of one of the main streets in the city so access to all areas is a 2 minute walk. There are churches, shops, museums and walks around the area within 10 minutes of the marina. I fell in love with the area almost immediately. Having travelled all over the world I often have a feeling that it might be interesting to live in some of the places I visit but usually discount this thought when the practicalities become obvious. This was different, I could see a life in Angra, albeit I’d need to speak Portuguese. 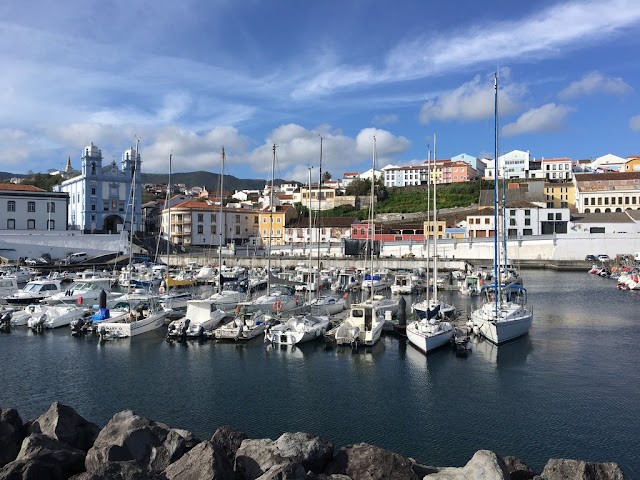 First night ashore I treated myself to a steak. 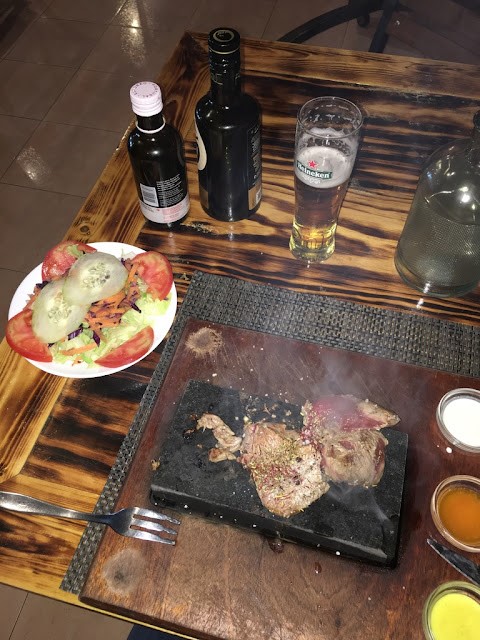 It took almost a week before I could sleep properly after the trip over. I regularly woke up poised for action just because the wind had changed or the rigging made a noise.

I visited the Jesuit College that became the Captain General’s palace and had a guided tour, just me. It was excellent and was the best way to find out more of the history of the island. The palace is beautiful and very well maintained. There are some items of very high quality furniture and the decoration and ceilings were of a very high standard.

I also visited the main museum, this was not a guided tour but gave glimpses into several eras of Terceira’s past. The first and second world wars featured as did Jesuit and Royal influence. Adjoining the museum is a church which was quite large and incredibly well decorated. 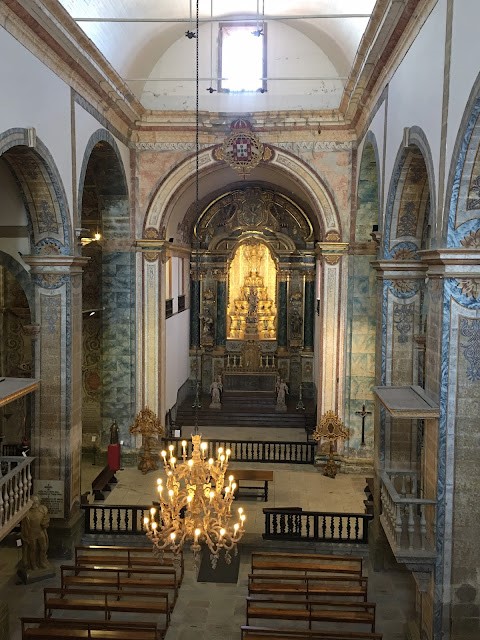 I also walked around quite a bit and enjoyed the peninsula which forms a natural harbour for the city. Angra suffered a sever earthquake about 40 years ago, every building with a bright orange roof was badly damaged. The geography is determined by volcanic action and the peninsula is an extinct volcano.

While I was in Angra marina I met a great couple from Ireland on their fabulous catamaran. They were on their way to Portugal for the winter and had been in the Caribbean prior to the Azores.

I didn’t go in but at the centre of the city is a cathedral which is lit up at night. All of the pavements in the centre area are made from black or white volcanic rock and set out in geometric patterns. Some shops have their signs set out in the stonework. 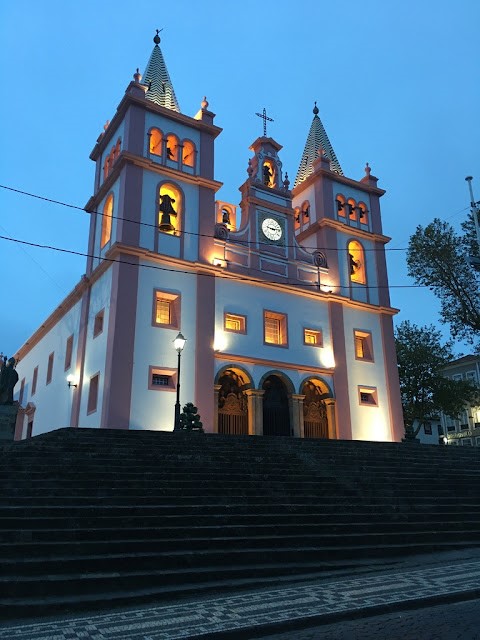 Angra deserves another visit, they were getting ready for a large festival just as I was leaving to go to Velas on São Jorge. I had been there 10 days, recovered from my trip over from the UK and was looking forward to seeing another island.

The best thing about Angra was the people, without exception they were friendly, helpful, patient and fun. A local politician and friend of the Jester Challenge came over to Angra to take me out for a drink and a local cake, a German singlehanded sailor, Hans on Snowball, help me sort out the rigging, Alex from Sailtours was all round fun and local shop keepers helped me find what I wanted. Just for the people alone I’d come back.

I have been sailing since I was 7, I started in Mirror dinghies at the local gravel pit and made my way up to VLCCs for a large oil company as Third Mate. After a break for family life I bought a MacWester Rowan 22’, Chantilly, which I sailed to Holland, Belgium, France and Ireland as well as around the UK East Coast. I still have Chantilly. For a short time I owned an Achilles 24, Mischief, that I had hoped to sail to the Azores but abandoned this plan after an eventful trip back from Ireland. My current boat is an Invicta 26’ Mk2, Louisa, which I bought just before the Covid lockdown. Due to timing, work commitments and various other factors I decided to enter the 2022 Jester Challenge to Newport Rhode Island. When I am not sailing my own boat I try and crew on a yacht delivery each year to build up experience. I have around 30,000 sea miles in yachts and various qualifications including YM Offshore under my belt. Louisa was built in the early 1970s and suits my singlehanded sailing needs to a tee, she is moored at Hoo Ness Yacht Club on the River Medway in Kent.

There are a number of different types of marine toilet, or heads. They fall into one of three categories – manual, electric and vacuum, the most common being the manual, hand pumped type. These have double acting piston-pumps which both discharge the waste and flush the toilet with sea water.

Most boat interiors have a combination of varnished and painted surfaces including solid wooden joinery, plywood laminates with thin hardwood veneers and glass reinforced plastic. When making your assessment of what you are going to do, bear in mind that the varnishing process consumes a lot of time, especially if the existing surfaces are in poor shape.

FREE tips from the Safe Skipper App for iPhone/iPad/Android: Getting a tow for your sail or power boat Plan how to secure a...
Read More

SafeSkipper1 day ago
⛵ Sailing Single Handed to the Azores. Part 9 - Around the Azores ⚓

SafeSkipper3 days ago
Commissioning a yacht survey before buying a boat is essential due diligence, but how should you go about it? Here's our complete guide