Jester Challenge – A modern experiment in old-fashioned self-reliance, self sufficiency, and personal responsibility.

The Jester Challenge was created for skippers of small boats who want to test their skill and self-reliance, is a uniquely successful experiment in single-handed ocean sailing. This site tells you everything you need to know about it: its history, philosophy, guidelines and future events, along with the views and experiences of skippers who have taken part over the years.

There is a Challenge every single year and new skippers are always welcome. If you like the idea of developing your offshore seamanship in a relaxed and supportive environment, visit the Jester Challenge website.

This is the ninth of a 10-part post where solo sailor Bernie Branfield shares his first hand account of his single-handed, 2022 Jester Challenge, from Plymouth, UK to the Azores, in his 26′ Invicta Mk2, Louisa. You can read more about Bernie at the end of the post.

After 10 days in Angra do Heroismo I was ready to test my sailing confidence so decided on a gentle run over to Velas on São Jorge Island. It was 55nm and should take a full day. I set off early after paying for my time in the Angra marina, 110 Euros for 10 days including extras (showers). The wind was from the NW and light so as soon as I passed the peninsula that forms a natural breakwater around Angra I had the sails up and the engine off. I made reasonable progress but about hallway between Terceira and Sao Jorge I was hit by the acceleration zone, F7 for a couple of hours was a good wake up call. Under a small head sail I crossed the gap but ended up further north than I had hoped and was in Martha’s Anguish, an area where the south going current is forced up by the underwater sea mounts off the SW tip of Sao Jorge. I quickly headed south until things calmed down.

It had rained pretty much non-stop since leaving Angra but on the way up the channel between Pico and Sao Jorge the rain stopped, the sun came out and the wind died. I motored for 20 miles up the coast past Manadas (see photo below) Riberia Seca, Calheta and the airport until I reach Velas. 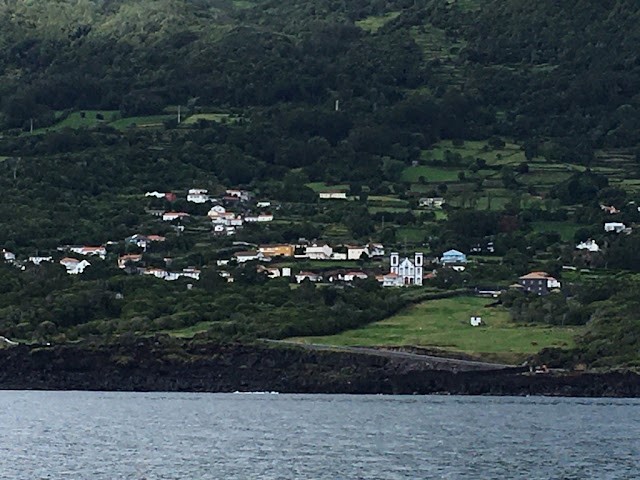 The villages are built on rock outflows from past volcanic activity and all have beautiful churches and appear to cling on to the island. A couple have small ports.

In Velas harbour I tried to anchor but wasn’t happy with the set so I moved into the marina. It had been a long day, 16 hours, but it felt great to be in this beautiful little marina. At night there was a very strange noise, initially I thought it was children messing around in the marina with cazoos but I later found out that the noise was nesting Cory Shearwaters.

The next day a lovely couple who have been cruising the world for 13 years came over to say hi. It was obvious from the first chat that we shared similar views about a lot of things and we got on very well. The next day they hired a car and the three of us toured the island. We went to several Fajas (villages built on rock out flows by the coast) and to the main towns of Topo and Calheta where we had a very nice lunch by the harbour. We visited a cheese factory, they only make one type of cheese and sell it by age. The three year old cheese was wonderful and we bought some.

Back in Velas we went for dinner to a local restaurant and had a fabulous meal, we querried the bill, wine was 1Euro for a large glass! The bill was correct but seemed far too small.

I visited the church in Velas and another in Riberia Seca. They are of a similar style with amazing interiors. 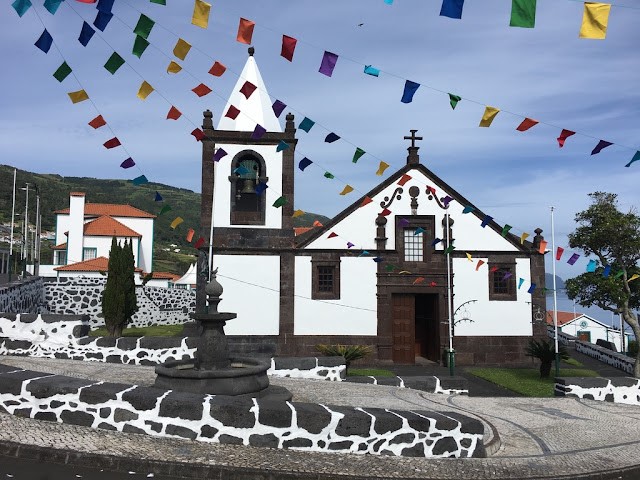 The museum in Velas was interesting and I was the only person there. As cheese plays a significant role in island life, much of the infrastructure and facilities are set up around its production. The island is extensively farmed and apart from some small fruit and veg production is given over to dairy. There are about 6 cheese co-operatives on the island and each area has an unmanned miniature cheese museum. These have large windows through which the local cheese production history is visible. 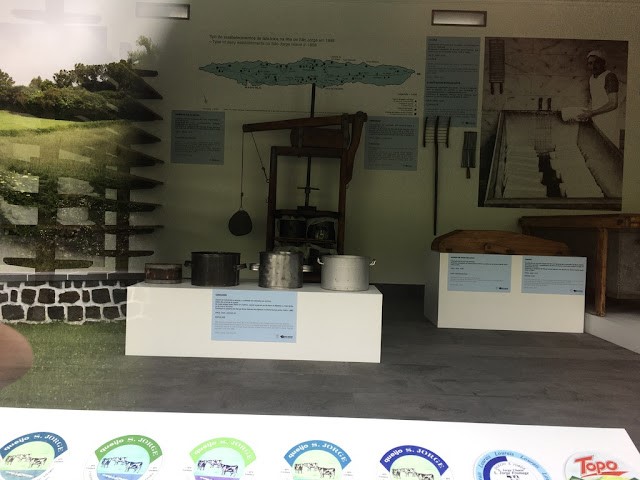 Sao Jorge was an excellent alternative to Terceira, much quieter with beautiful rolling countryside and a sense of purpose around cheese production. It would be worth visiting Sao Jorge with walking boots and a bit more time to explore the coastal paths.

I have been sailing since I was 7, I started in Mirror dinghies at the local gravel pit and made my way up to VLCCs for a large oil company as Third Mate. After a break for family life I bought a MacWester Rowan 22’, Chantilly, which I sailed to Holland, Belgium, France and Ireland as well as around the UK East Coast. I still have Chantilly. For a short time I owned an Achilles 24, Mischief, that I had hoped to sail to the Azores but abandoned this plan after an eventful trip back from Ireland. My current boat is an Invicta 26’ Mk2, Louisa, which I bought just before the Covid lockdown. Due to timing, work commitments and various other factors I decided to enter the 2022 Jester Challenge to Newport Rhode Island. When I am not sailing my own boat I try and crew on a yacht delivery each year to build up experience. I have around 30,000 sea miles in yachts and various qualifications including YM Offshore under my belt. Louisa was built in the early 1970s and suits my singlehanded sailing needs to a tee, she is moored at Hoo Ness Yacht Club on the River Medway in Kent.

Rudders and steering systems. A rudder is one of the most critical parts of a boat. Rudder failure is a common occurrence on neglected or overworked boats and a very unpleasant and potentially dangerous thing to happen when you are out at sea.

The first question that comes to mind when thinking about buying a boat is: what type of boat? There are more than 20 different kinds, of different sizes, for different purposes, and different pockets. So, your first step is to decide your boat type.

SafeSkipper18 hours ago
⛵ Sailing Single Handed to the Azores. Part 9 - Around the Azores ⚓

SafeSkipper2 days ago
Commissioning a yacht survey before buying a boat is essential due diligence, but how should you go about it? Here's our complete guide